This article heading caught my eye. It’s interesting to get an informed and postmodern sensitive Presbyterian’s perspective into the “worship wars.” Two more quotes to follow: 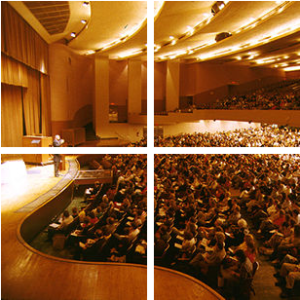 One of the basic features of church life in the United States today is the proliferation of corporate worship and music forms. This, in turn, has caused many severe conflicts within both individual congregations and whole denominations. Most books and articles about recent trends tend to fall into one of two categories. “Contemporary Worship” (hereafter CW) advocates often make rather sweeping statements like “Pipe organs and choirs will never reach people today.” “History Worship” (hereafter HW) advocates often speak similarly about how incorrigibly corrupt popular music and culture is, and how their use makes contemporary worship completely acceptable.

Contemporary Worship: Plugging In?
One CW advocate writes vividly that we must “plug in” our worship to three power sources: “the sound system, the Holy Spirit, and contemporary culture.” But sever problems attend the promotion of strictly contemporary worship.

First, some popular music does have severe limitations for corporate worship. Critics of popular culture argue that much of it is the product of mass-produced commercial interests. As such, it is often marked by sentimentality, a lack of artistry, sameness, and individualism in a way that traditional folk art was not.

Second, when we ignore historic tradition, we break our solidarity with Christians of the past. Part of the richness of our identity as Christians is that we are saved into a historic people. An unwillingness to consult tradition is not in keeping with either Christian humility or Christian community. Nor is it a thoughtful response to the postmodern rootlessness that now leads so many to seek connection to ancient ways and peoples.

Finally, any corporate worship that is strictly contemporary will become dated very quickly. Also, it will necessarily be gauged to a very narrow market niche. When Peter Wagner says we should “plug in” to contemporary culture, which contemporary culture does he mean? White, black, Latino, urban, suburban, “Boomer,” or “Gen X” contemporary culture? Just ten years ago, Willow Creek’s contemporary services were considered to be “cutting edge.” Already, most younger adults find them dated and “hokey,” and Willow Creek has had to begin a very different kind of “Buster” service in order to incorporate teenagers and people in their twenties.

Hidden (but not well!) in the arguments of CW enthusiasts is the assumption that culture is basically neutral and that thus there is no reason why we cannot wholly adopt any particular cultural form for our gathered worship. But worship that is not rooted in any particular historic tradition will often lack the critical distance necessary to critique and avoid the excesses and distorted sinful elements of the particular surrounding culture. For example, how can we harness contemporary Western culture’s accessibility and frankness but not its individualism and psychologizing of moral problems?

HW advocates, on the other hand, are strictly “high culture” promoters, who defend themselves from charges of elitism by arguing that modern pop music is inferior to traditional fold art. But problems also attend the promotion of strictly traditional, historic worship.

First, HW advocates cannot really dodge the charge of cultural elitism. A realistic look at the Christian music arising from the grassroots folk cultures of Latin America, Africa, and Asia (rather than from commercially produced pop music centers) reveals many of the characteristics of contemporary praise and worship music–simple and accessible tunes, driving beat, repetitive words, and emphasis on experience. Much of high culture music takes a great deal of instruction to appreciate, so that, especially in the United States, a strong emphasis on such music and art will probably only appeal to college-educated elites.

Second, any proponent of “historic” corporate worship will have to answer the question, “Whose history?” Much of what is called “traditional” worship is very rooted in northern European culture. While strict CW advocates may bind worship too heavily to one present culture, strict HW advocates may bind it too heavily to a past culture. Do we really want to assume that sixteenth-century northern European approach to emotional expression and music (incarnate in the Reformation tradition) was completely biblically informed and must be preserved?

Hidden (but not well!) in the arguments of HW advocates is the assumption that certain historic forms are more pure, biblical, and untainted by human cultural accretions. Those who argue against cultural relativism must also remember that sin and falleness taints every tradition and society. Just as it is a lack of humility to disdain tradition, it is also a lack of humility (and a blindness to the “noetic” effects of sin) to elevate any particular tradition or culture’s way of doing worship. A refusal to adapt a tradition to new realities may come under Jesus’ condemnation of making our favorite human culture into an idol, equal to the Scripture in normativity (Mark 7:8-9). While CW advocates do not seem to recognize the sin in all cultures, the HW advocates do not seem to recognize the amount of (common) grace in all cultures.

Bible, Tradition, and Culture
At this point, the reader will anticipate that I am about to unveil some grand “Third Way” between two extremes. Indeed, many posit a third approach called “blended worship.” But it is not as simple as that. My major complaint is that both sides are equally simplistic…

Buy the book to read on

2 thoughts on “Reformed Worship in the Global City (Four Quotes)”

Repost from @cornerstoneames
It takes intentionality to avoid this path. But Jesus embodied the exact opposite of this, a life of degradation for the sake of others.
REMINDER: We have a computer for student use in the CST Library. It is loaded with Accordance Bible Software.
We had a great kick of June 6th! Excited for the year!