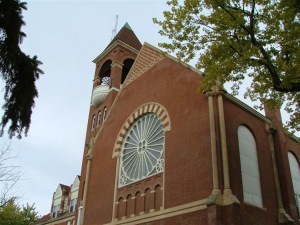 From the Religion Roundup – AP
Students, Faculty Praying Nonstop For Bible College’s Survival
OWATONNA, Minn.
A decline in enrollment and a lack of donations at Pillsbury Baptist Bible College has students and faculty praying nonstop for the school’s future.

For the Minnesota school to continue operating as it is now, officials say they need an enrollment of at least 200 students. Currently, 170 students attend Pillsbury Baptist.

They’re taking turns for 30 minutes a day in an around-the-clock prayer campaign.

Pillsbury, an accredited college founded in 1957, prepares students for ministry or missionary work in Baptist churches.

School officials are recruiting students from Baptist churches throughout the country. The school is also working to raise 600-thousand dollars by next fall.

The son of Maurice and Anna Metzger, he earned a bachelor’s degree from Lebanon Valley College in 1935, a bachelor of theology degree from Princeton Seminary in 1938 and a doctorate in classics from Princeton University in 1942. He became an ordained minister with the Presbyterian Church in 1939.

Metzger began his teaching career at Princeton Theological Seminary in 1938, where he stayed in the New Testament department for 46 years. During his time at the seminary, Metzger developed 25 courses on the English and Greek texts of books in the New Testament.

He was also involved with committees in the production of three new editions of the Scriptures: the United Bible Societies’ Greek New Testament (1966), the Reader’s Digest condensed Bible (1982) and the New Revised Standard Version (1990).

In 1986, Metzger was elected to the American Philosophical Society in the class devoted to the Humanities and in 1994 he was awarded the F.C. Burkitt Medal by the British Academy for his contributions to biblical studies.

Metzger is survived by his wife of 62 years, Isobel Mackay Metzger, two sons and a sister. A memorial service is scheduled for Tuesday, Feb. 20, in Princeton.

So Molly and I made Fox News this week.