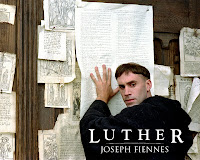 Before I watched the movie Luther last night (my wife is out of town, so I could get by with watching a “boring” movie about history), I watched the actor interviews by Joseph Fiennes who plays Martin Luther. I don’t know what I was expecting to hear, but this is what I heard:

On the Central Idea of the Film:

I think it’s very much about the minority, and the suppressed. And particularly in this story it’s about the control of the Catholic church at the masses during that time through language and interpretation. I think if anything is relevant it shows that you can’t keep man down. You can’t control him and that sooner or later he will gain knowledge and through the knowledge power to be liberated, freedom of conscience.”

As an actor I’m sure that most actors look at their characters and try to identify, or at least sympathize 100% in order to understand and be believable. So that would be my approach. I live in a very different time than Martin but I can still try to draw parallels and I think that that is really the challenge of this project is to bring it into a modern context. I tried to play Martin with doubt as much as knowing what’s right. And I think that is a very human condition even with those who are driven 100%, pursued with doubt. Here’s a man who’s a genius, invented a lot of the German language, and brought Rome down, and yet I like the idea that he is still human pursued by doubt. So if I was to draw out any trait it would probably be doubt.”

Reminds me of Bauder’s comment that “Aragorn is degraded from a finite but messianic savior‐figure into a tortured postmodern, beset by angst and ambiguity.” Fortunately, I got the sense that the script was strong enough that Fiennes couldn’t really turn Martin Luther into a full blown postmodern.