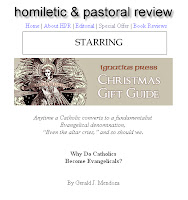 The paper is trying to deal with this sentiment: “When we need a labor union we go to our parish priest; when we need the word of God we go to the Protestant pastor,”

Interesting to note thier understanding of the Church’s mission:

Thus, Evangelii Nuntiandi expresses a truth about the Church and her purpose, which is not new, but rather exists since the evangelistic mission of Christ himself and it is the continuing mission of the Church, which he established through the apostles, and the power of the Holy Spirit…The question becomes then, what exactly does the Church mean by “evangelization?” While the term is multivalent in terms of meaning and interpretation, the Church is clear in what it principally means:

During the Synod, the bishops very frequently referred to this truth: Jesus Himself, the Good News of God, was the very first and the greatest evangelizer; He was so through and through: to perfection and to the point of the sacrifice of His earthly life. To evangelize: what meaning did this imperative have for Christ? It is certainly not easy to express in a complete synthesis the meaning, the content and the modes of evangelization as Jesus conceived it and put it into practice. In any case the attempt to make such a synthesis will never end. Let it suffice for us to recall a few essential aspects. As an evangelizer, Christ first of all proclaims a kingdom, the kingdom of God; and this is so important that, by comparison, everything else becomes “the rest,” which is given in addition. Only the kingdom therefore is absolute and it makes everything else relative. The Lord will delight in describing in many ways the happiness of belonging to this kingdom (a paradoxical happiness which is made up of things that the world rejects), the demands of the kingdom and its Magna Charta, the heralds of the kingdom, its mysteries, its children, the vigilance and fidelity demanded of whoever awaits its definitive coming. (Evangelii Nuntiandi, 7 & 8)