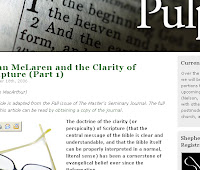 The doctrine of the clarity (or perspicuity) of Scripture (that the central message of the Bible is clear and understandable, and that the Bible itself can be properly interpreted in a normal, literal sense) has been a cornerstone of evangelical belief ever since the Reformation.

The dominant Roman Catholic idea had been that the Bible was obscure and difficult to understand. But the Reformers disagreed, arguing instead that anyone who could read could understand biblical teaching. Rather than limiting biblical interpretation to the clergy or the Magisterium, the Reformers encouraged lay Christians to study and interpret God’s Word on their own. All of this was premised on the Reformed belief that the Bible itself was inherently clear, and that God had been able to communicate His message to men in an understandable fashion. As Luther explained to Erasmus:

But, if many things still remain abstruse to many, this does not arise from obscurity in the Scriptures, but from [our] own blindness or want [i.e. lack] of understanding, who do not go the way to see the all-perfect clearness of truth…. Let, therefore, wretched men cease to impute, with blasphemous perverseness, the darkness and obscurity of their own heart to the all-clear scriptures of God…. If you speak of the internal clearness, no man sees one iota in the Scriptures but he that hath the Spirit of God…. If you speak of the external clearness, nothing whatever is left obscure or ambiguous; but all things that are in the Scriptures, are by the Word brought forth into the clearest light, and proclaimed to the whole world. (Bondage of the Will, 25-29)